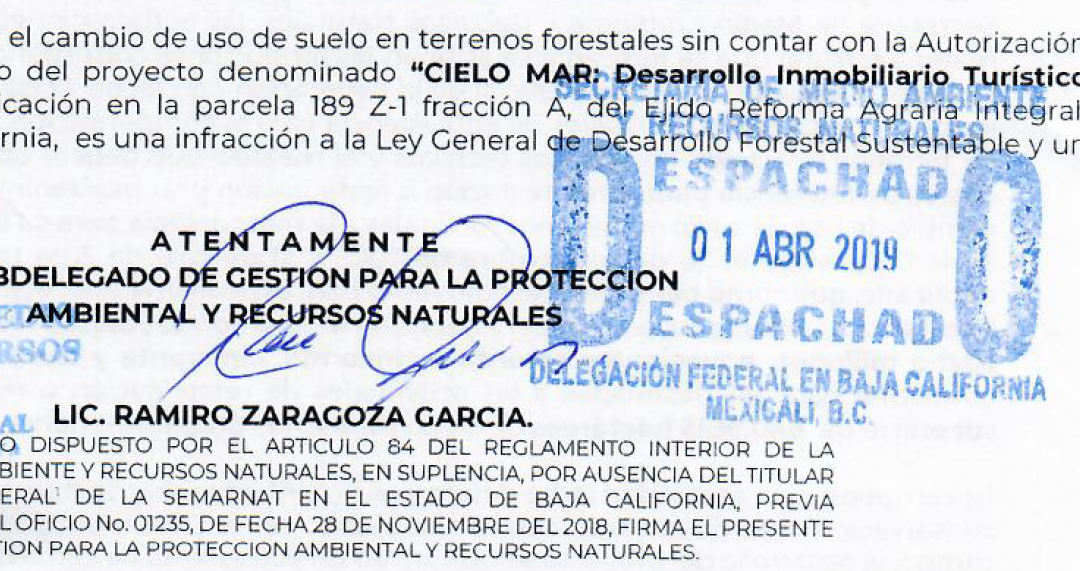 Change of Land Use

The change of use from rustic land to commercial (real estate development) land is very similar to re-zoning in the U.S. Only, Cielo Mar is located in a “Protected Area” – like a National Forest in the U.S. There is no problem with developing in this area, but the process is more exhaustive where it involves the environmental impact study and statement. The process was not without its challenges, and there are many reasons why SEMARNAT and/or other departments with which SEMARNAT is responsible for ensuring satisfaction of any requirements, concerns, etc., could refuse an application. But we have very good people working for us, as well as coaching us. Estrada and BIOS Consultants did most of the heavy lifting, with Juan Carlos of BIOS Consultants presenting our application to the authorities. The presentation included our Phase I Execution Plan in combination with the environmental study and impact statement, which involved very detailed information about the project, the site, and actually involved a visit by authorities to the site accompanied by Juan Carlos.

We did have some minor delays of the sort that seem inevitable with any substantial project, though we were well on-track (just barely) with our estimated target date of Fall 2018. We gave ourselves just a little more time when we revised our estimate to “before year-end.” We originally expected to have the approval signed in September/October, but those “little” delays pushed us right up against December 1, the date of the changeover of the administration, from Mexico’s presidential election that took place in July. The changeover occurred just as we were expecting the final approval. And then it took some time as new officials were being put in place and policies and priorities were being established. In fact, the SEMARNAT post in Ensenada is still not filled. Our application was elevated to the state capital, Mexicali. 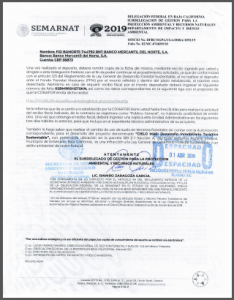 The good news is that the project was well received by the incoming officials. In fact, we learned first-hand that, post-election, leadership in the top offices in the environmental and tourism departments and ministries of both the state and the federal governments are very supportive of Cielo Mar.

Understanding that substantial real estate projects like Cielo Mar can be “hot buttons” for many in politics or other special interests – for, or against – as confident as we were in our position, there were many reasons until we had the approval notification that we felt we must remain absolutely silent about the status of our application. It is simply too important for the company.

The land use approval was the most important milestone to achieve for the entire project. We have no concerns about the actual building permits, there will be many of them. So until now, much of our focus had to be directed at the effort for obtaining the approval, as well as funding, while continuing the work of further planning and design, including infrastructure, structures, organization & services, layout, design, sales and marketing. Having achieved this milestone, and with the closing of the first step in our financing plan around the corner, we look forward to shifting our view to the implementation and execution, while there will be ongoing planning and design work for years going forward, as this is a massive development.

The original notification of our land use approval is posted here for reference, of course it is in Spanish. It specifies a one-time assessment that will cost approximately $450,000 “for the concept of environmental compensation for activities of reforestation or restoration and its maintenance” for the affected land. This assessment applies to land anywhere that is being converted from agrarian rustic land to commercial land (is actually more for commercial agriculture, as was necessary for the Arenoso farm, which is not in the Protected Area), not just in Protected Areas – though slightly more cost in protected areas. We have 30 business days to pay this and then we are done. 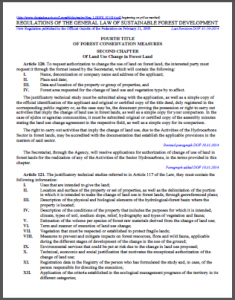 We’ve also prepared and posted the Law, as well as the Regulation that defines the process that we went through for the approval. Since we have already gone through this, we hope to save time for anyone who may be interested to understand the details more clearly. The procedure document posted here, we believe, is a fair translation (using Google Translate) of the official documents that are in Spanish. The links for the original documents are included in the document, and an area of interest is highlighted that concerns where we are in the process: authorities are now just waiting for our “deposit to the Fund.”

We have mentioned at one time or another about an increasingly high commercial and consumer demand across the Baja Peninsula for expanding the 2-lane Transpeninsular Highway to 4 lanes. And this will be very good for Cielo Mar, as it is an important road for access to the development from the U.S. border south of San Diego. The section in the north from Tijuana to Ensenada already has 4 lanes. Well, the good news is that the front runner for the next governor of Baja California stated just last week that he would give his support to widening the highway to 4 lanes, from Ensenada to Guerrero-Negro*. This is a 600km (370 miles) stretch of roadway, and El Rosario and Cielo Mar are almost exactly at the midway point.

What is more, we have been recommended by officials to submit a request immediately – which we are doing – to add a leg to the 4-lane project to connect to Cielo Mar, so that the government might construct this road for us. The road as it is now, though only a dirt road, is being used for access to the fishing marina that is located about 8 miles south of the Cielo Mar site. So there is daily traffic on the public roadway through the Cielo Mar development area, albeit as few as 15 or 20 vehicles per day at this time. This is the road that we received approval for moving, earlier in the project planning.

Now, we do not expect to see this highway expansion next year, though it is possible. And we may or may not see the government construct a 15-mile road to Cielo Mar for us. But this is a start, and the interest and support shown once again for our project reflects what we have stated previously about the commitment from the Mexican government to further the tourism industry in Baja California.

This article, published just last week, is at the peak of political posturing for the upcoming gubernatorial election (governor of Baja California, on June 2), and so the full text of the article includes comments and criticism stating that this project may be too costly or it may never happen because they have not completed a smaller 52km stretch of highway that has been needed for 15 years.

“On March 31, Jaime Bonilla, candidate for governor for the coalition Juntos Haremos Historia, made up of Morena, Transformemos, Partido del Trabajo and Partido Verde Ecologista de México, explained that if elected as Francisco Vega de Lamadrid’s successor, he will seek to improve the infrastructure from Ensenada to Guerrero Negro, from a four-lane highway to boost the state’s economy.

When requesting the opinion of the representative of Coparmex Ensenada, he accepted that there is a need to expand the highway and that this would boost the regional economy.

The academic of the cell of Economic Processes in Ibero Tijuana, Rodolfo Salazar, agrees.

“First to promote better communication and displacement of agricultural products that represent an important source of export,” he said. Although it also sees additional benefits in the tourist industry.

He said that currently, the conditions “are limited for the large flow of cargo movement and passengers.”

* Guerrero-Negro (http://www.guerreronegro.org/whalecome.html) is the most widely recognized and popular destination for whale watching around the peninsula, as the mother whales nurse their newly born calves.